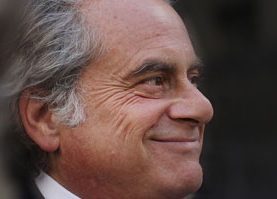 Benjamin Brafman is the principal of the six-lawyer firm Brafman & Associates, P.C., located in Manhattan, where he specializes in criminal law with an emphasis on white-collar criminal defense. Mr. Brafman, a former Assistant District Attorney in the Rackets Bureau of the New York County District Attorney's Office, has been in private practice since 1980. He received his L.L.M. in Criminal Justice from New York University School of Law and is a Fellow in the American College of Trial Lawyers. Mr. Brafman most recently successfully represented Sean “P. Diddy” Combs on bribery and weapons charges in New York. Mr. Brafman is a frequent lecturer and panelist on criminal defense issues, having most recently participated in a forum sponsored by the U.S. District Court for the Eastern District of New York on the application of the Federal Sentencing Guidelines and as a panelist at the U.S. District Court in Central Islip, New York on the Attorney-Client Relationship in Corporate America, Post Enron. Brafman's family fled from Europe to Cuba on their way to the United States just before World War II. He received an ultra-Orthodox education. Brafman is a practicing Orthodox Jew. He is a graduate of Brooklyn College and Ohio Northern University College of Law. He also has an LL.M. from New York University School of Law. He lives in Lawrence, New York.