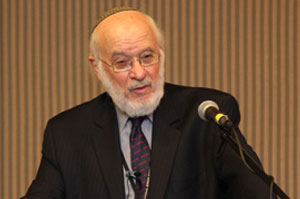 Nathan (Nat) Lewin is a renowned lawyer and leader of the American Jewish community. Between 1982 and 1984 he served as President of the Jewish Community Council of Greater Washington and for more than 30 years he served as the national vice president of the National Jewish Commission on Law and Public Affairs (COLPA). Lewin was president of the American Section of the International Association of Jewish Lawyers and Jurists from 1992 to 1997. He is currently Honorary President of its successor, the American Association of Jewish Lawyers and Jurists. Notable cases Mr. Lewin has been involved in include former President Richard Nixon in the Supreme Court case testing the constitutionality of the taking of Presidential papers and tapes; actress Jodie Foster in the prosecution of John Hinckley; performer John Lennon in the successful appeal of his immigration case; an Air Force psychologist in the Supreme Court case testing his constitutional right to wear a yarmulke while on duty; a lawsuit against Yale University on behalf of Orthodox freshmen and sophomores who could not reside in co-educational dormitories on religious grounds; lawsuits on behalf of Sabbath-observers who were discriminated against in private employment, on behalf of military chaplains who were denied the right to wear religiously-motivated beards, and on behalf of Jewish prisoners who were denied kosher food.