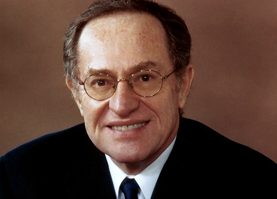 Alan Morton Dershowitz is an American lawyer, jurist, and political commentator. He is a prominent scholar on United States constitutional law and criminal law. After graduating Brooklyn College and Yale Law School, he joined the Harvard Law School faculty where he spent most of his career. At the age of 28, he became the youngest full professor of law in its history. He held the Felix Frankfurter professorship there from 1993 until his retirement in December 2013. Alan Dershowitz was involved in several high-profile legal cases and was a commentator on the Arab–Israeli conflict. As a criminal appellate lawyer, he has won 13 of the 15 murder and attempted murder cases he has handled. In 1983, the Anti-Defamation League of the B'nai B'rith presented him with the William O. Douglas First Amendment Award for his "compassionate eloquent leadership and persistent advocacy in the struggle for civil and human rights." He has also published more than 1000 articles in magazines, newspapers, journals and blogs such as The New York Times Magazine, The Washington Post, The Wall Street Journal, The Harvard Law Review, the Yale Law Journal, Huffington Post, Newsmax, Jerusalem Post and Ha’aretz. Professor Dershowitz is the author of 30 fiction and non-fiction works with a worldwide audience, including The New York Times #1 bestseller Chutzpah and five other national bestsellers. His autobiography, Taking the Stand: My Life in the Law, is being published in October by Crown, a division of Random House. Earlier titles include “an exceptional, action packed book,” The Trials of Zion, a novel which has been called “a thought-provoking page turner;” Rights From Wrong; The Case For Israel; The Case For Peace; Blasphemy; Preemption; Finding Jefferson; and Shouting Fire. Together with his wife Dr. Carolyn Cohen he has three children and two grandchildren.

A Comparison between the Six-Day and Yom Kippur Wars By: Alan Dershowitz   In both 1967 and 1973 Israel faced the decision whether to…