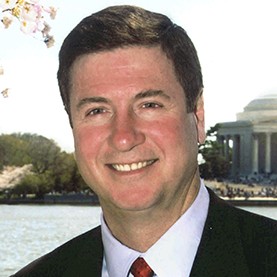 George Felix Allen, a former United States Senator and representative to Congress, was elected Governor of Virginia holding that position until 1998. Allen, the son of former NFL head coach George Allen, received his bachelors of arts in history and juris doctor from the University of Virginia. During his 2006 campaign for reelection to the Senate, rumors circulated concerning Allen’s possible Jewish heritage. In August, 2006, Allen learned from his mother Henrietta “Etty”, that she had been raised as a Jew in Tunisia and that his maternal grandfather, Felix Lombroso had been imprisoned by the Nazis during the occupation of Tunis. Since learning of his Jewish roots, Allen has taken to heart the fundamental principles of freedom of conscience, belief and religion. Recently, Allen founded the American Energy Freedom Center. He is presently the Reagan Ranch Presidential Scholar for the Young American’s Foundation. He is also seeking to regain his Senate seat during the next election.

Former Governor and U.S. Senator George Allen believes that one of the pillars of a free and just society is religious freedom. From his time as Governor through his term in the U.S. Senate, he has exhibited a great understanding and appreciation for religious tolerance and freedom, including when he learned of his Jewish heritage and the story of his mother surviving Nazi rule in Tunisia.